Be the first to make it around the track, keeping your chariot in control and avoiding obstacles in this simple, free, print and play game for 2-3 players.

What you need to play: 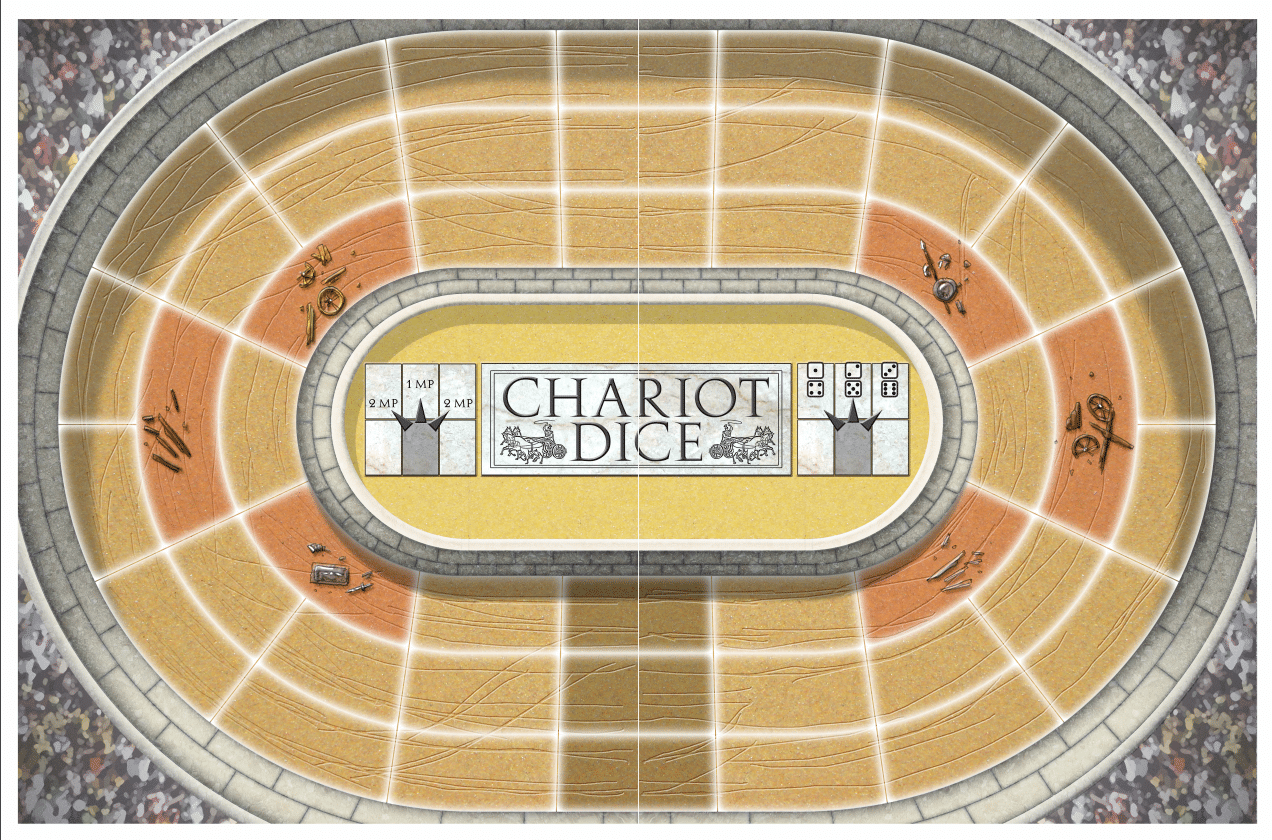 Each player has a chariot represented by an icon and three numbers.

The number in front represents the speed of the chariot.

The number above represents the skill of the chariot.

Chariots start with a speed of three and health of six. Each player places their markers on the darker starting spaces. The chariots are placed randomly on these starter positions. Once the chariots have been placed on the track, determine the chariots to take the first turn by rolling dice, the chariot rolling the highest number goes first. After this player takes their turn, play continues clockwise from this chariot based on the starting position of the others.

The skill is determined by the number of previous wins, and by denarii spent on training when enrolling in the chariot. The skill starts at zero and can be a maximum of three.

On their turn, players do the following:

Step 1 – Adjust chariot speed or attack or block
You can adjust the speed of your chariot, or leave the speed the same.
The maximum speed for a chariot is six, the minimum speed is one.

If you do not change your speed or block, you can choose to attack one of the other chariots by whipping or raming. The other chariot being attacked can be in any lane and within one number of spaces ahead or behind.

Attack by rolling one dice. If the roll is less than or equal to their current health, the attack
succeeds – reduce their health by one.

If you do not change your speed or attack, you can choose to block one of the other chariots. The other chariot being blocked can be in any lane and be within two number of spaces behind or tied with the blocking chariot.

If you block a chariot add one uncontrolled movement to their turn and reduce speed by one. Note, speed cannot be lower than one.

If the roll is greater than your chariot’s speed, then ignore the roll, meaning that you have
no uncontrolled movement this turn.

While you are moving, you must do your uncontrolled movement for the turn as well. 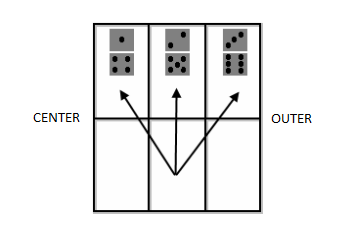 Any time a chariot ends its movement in the same spot as another chariot reduce the health of both chariots by one and move the chariot that originally occupied the position straight ahead one spot.

Your chariot starts with six health. If your chariot is ever reduced to zero health, you are
out of the game as the chariot is destroyed.

These are the conditions, in addition to those previously mentioned, that will reduce a chariot’s health:

• You end movement into a dangerous section of the track (spaces that contain debris). After moving into one of these spaces, reduce the health of your chariot by one.

• One chariot ends its movement in a space occupied by another chariot. Both the chariot that moved into space and any chariot on that space already reduce their health by
one.

• Hitting the track wall will reduce the health of your chariot by one.

• A successful attack on a chariot will reduce the health of your chariot by one.

• Rolling roll 4 or 6 during uncontrolled movement will reduce the health of your chariot by one.

If health reaches zero then the chariot crashes and is out of the race. Roll dice to determine if the driver lives or dies. If the number rolled + skill is less than or equal to four then the driver is dead. Otherwise, the driver lives.

The spot on the board occupied by the crashed chariot becomes a dangerous section of the track for the remainder of the race.

Winning:
The first player to make one full lap around the track and enter one of the starting spaces wins.