The Roman Republic quantifies participation in our community through the awarding denarii.

In some ways denarii is like a currency. In important ways, it is very different from currency. Ultimately, denarii does not have monetary value, it cannot be exchanged for American Dollars etc. In this respect, it is better to think of denarii as a measure of honour accumulated by helping build the modern Roman Republic. Like currency, denarii can also be traded with those citizens who volunteer to assist you with your interests and projects.

Denarius is automatically awarded for doing many things. For example:

Note: This is not an exhaustive list of possible denarii rewards

What are denarii used for?

I. Determining the weight of one’s vote in the Comitia Centuriata

II. Being used to reward and motivate members towards projects and initiatives both public and private. (eg. rewarding a citizen for providing advice, resources, teaching, developing a web site, answering question, etc.)

III. May be used to offer discounts in a future Roman Republic store. (not yet implemented)

How do I know how much denarii I have?

Your denarii balance and a record of all transactions are displayed on your citizen profile. See the image below. 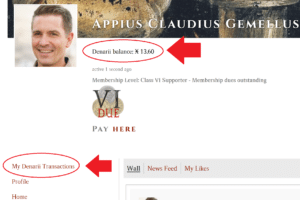 How do I give denarii to another citizen?

Go to this page. Enter the fill roman name of the recipient of the denarii and then enter the amount to be given. Then click “send denarii”. This transaction should then be recorded on your “My Denarii Transactions” page located on your citizen profile.