Chariot racing was the most popular sport in Rome, appealing to all social classes from slaves to the emperor himself. This appeal was no doubt enhanced by the private betting that went on, although there was no public gambling on the races. The popularity of chariot racing is reflected in the many household items decorated with racing motifs.

Although most Roman charioteers (called aurigae or agitatores) began their careers as slaves, those who were successful soon accumulated enough money to buy their freedom. The four Roman racing companies or stables (factiones) were known by the racing colors worn by their charioteers. 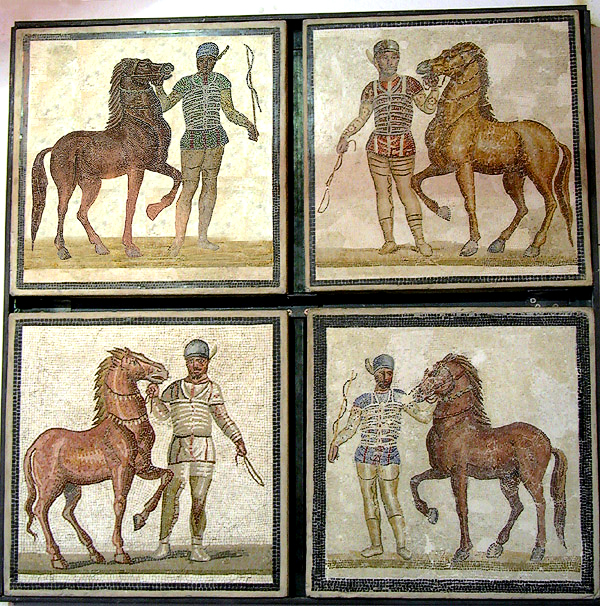 This mosaic depicts a charioteer and horse from each of the stables, Red, White, Blue, and Green.

Fans became fervently attached to one of the factions, proclaiming themselves “partisans of the Blue” in the same way as people today would be “Yankee fans.” The factions encouraged this sort of loyalty by establishing what we might call “clubhouses” in Rome and later in other cities of the empire. In the first century CE, the Roman writer and statesman Pliny the Younger criticized this partisanship (Letters 9.6):

I am the more astonished that so many thousands of grown men should be possessed again and again with a childish passion to look at galloping horses, and men standing upright in their chariots. If, indeed, they were attracted by the swiftness of the horses or the skill of the men, one could account for this enthusiasm. But in fact it is a bit of cloth they favour, a bit of cloth that captivates them. And if during the running the racers were to exchange colours, their partisans would change sides, and instantly forsake the very drivers and horses whom they were just before recognizing from afar, and clamorously saluting by name. (translated by William Melmoth, H. A. Harris, Sport in Greece and Rome [Ithaca: Cornell University Press, 1972], 220-21)

These stables competed for the services of the best charioteers, whose popular celebrity surpassed even that of modern sports heroes, and they were depicted in many statues and monuments, like the relief shown above from Neumagen, Germany (Trier Museum). One famous charioteer of the second century CE, Gaius Appuleius Diocles, left a detailed record of his career (CIL 6.10048). He began driving for the Whites at the age of 18; after 6 years, he switched to the Greens for 3 years, and then drove 15 years for the Reds before retiring at the age of 42. He won 1,462 of the 4,257 four-horse races in which he competed, and his winnings totaled nearly 36 million sesterces. Diocles’ career was unusually long; many charioteers died quite young (Fuscus at 24, Crescens at 22, Aurelius Mollicius at 20). Charioteers wore little body protection and only a light helmet; their practice of wrapping the reins tightly around their waists so they could use their body weight to control the horses was exceedingly dangerous in the case of accidents, since they could be dragged and trampled before they could cut themselves loose.