These heavy sandals are the classic Roman army boot.  Numerous examples have been found at first-century sites.

Construction involves a lot of careful cutting but is otherwise straightforward.  The upper is cut from a single piece of c. 8-ounce leather, well-oiled (with neatsfoot oil) to prevent decay.  Cutting away the slots in each tab and the spaces between them actually removes most of the leather.  On a good caliga there should be more space than leather, making it seem very open.  Since the leather is quite thick, strength should not be a problem, and in fact, leaving too much leather can make it less flexible and prone to chafing.

The sole is one-half to three-quarters inch thick and is made of two or more layers (8-ounce or heavier), with the upper sandwiched between the top two.  The layers are held together with hobnails, driven in from the bottom and the shanks clenched to hold them permanently.  Cover the clenched points with an additional insole of leather, felt, or sheepskin, securing it in place with a few stitches.  The heel is sewn with a butted seam, using edge-grain stitches.

Some hobnails are easily hammered in with the shoe laying bottom-up on an anvil or flat piece of steel, so that the shanks simply bend neatly as they are driven into place and hit the steel.  However, hammering on a conical nail can flatten it, so it may be necessary to use a variation on the riveting tool.  Use an awl to poke the hole for the each nail, push it into place, set the nailhead into a conical hole in a suitably heavy piece of metal, and then clench the tip of the shank over the leather with a hammer. 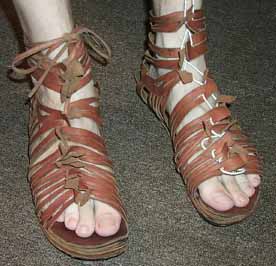 One of the caligae above at right is shown loosely laced with a white cord to make the lacing easier to see.  The lace is threaded criss-cross through the slits in the tabs or straps just like a modern shoe is laced.  (There are no clear depictions of the laces in military caligae, but there are many depictions of civilian shoes laced in this fashion.)

The tabs or straps are made long enough to meet in the middle and turn upwards, reaching another half to three-quarters of an inch.  The slits should end just short of the point where the tabs turn upwards.

The caligae at bottom right are sewn up the back with a butted seam, though other methods are also acceptable.

See also the footwear at the bottom of the Civilian Clothing page, and Socks on the Cold Weather Clothing page.

The conical or domed iron hobnails should be about .25″ to .5″ in diameter.

Before cutting good leather, make a working mock-up out of vinyl, junk leather, or heavy cloth.  DO NOT MAKE THE SOLES TOO WIDE–trace your foot and cut the soles *narrower* by 1/4″ on each side.  Make the tabs extra long and the slits shorter than necessary, and adjust them later.

One clever trick for making a pattern is to put on an old sock and cover it (not too tightly) with a couple layers of duct tape.  Then cut it carefully off, slitting it down the front and back, and open it out flat.   Use this as the basis for your mockup, remembering that the tabs need to extend beyond the cut top/front edges of the taped sock by an inch or so (because the edges of the taped sock just meet in the middle, while the tabs of the caligae sort of overlap, right?).

Above is the sole of a civilian shoe, showing a very typical nail pattern of simple straight lines.