The plate-covered belt popularly called a cingulum was actually known as a balteus.  In the mid-first century AD a single belt to support the dagger was most common, but the two crossed belts worn in Augustan times still appeared.  It is clear that the balteus was a valuable personal posession.  Although made in army workshops and probably a required item of equipment, it was perhaps not issued at random but more carefully chosen by the soldier according to his own tastes, and budget. 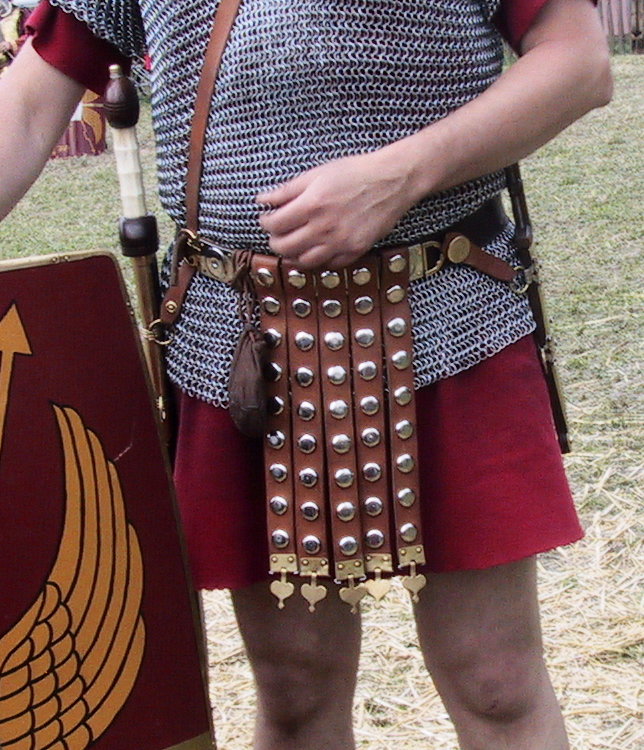 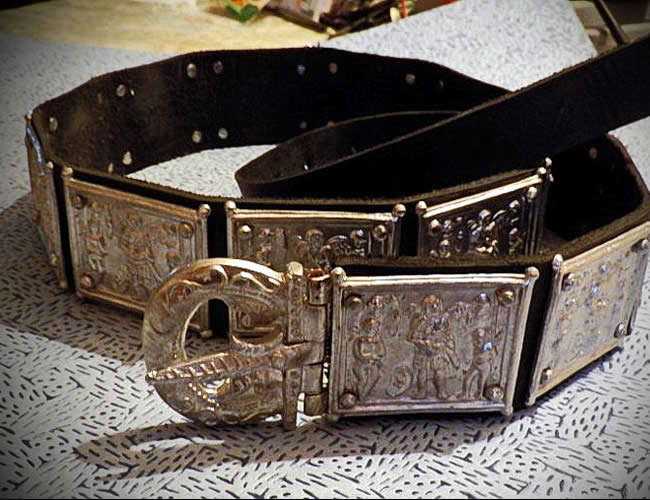 Beltplates are generally described as either narrow or wide.  The narrow plates are the older style, the narrow belts often being worn in pairs.  These plates are either cast brass or cut from sheet, and frequently tinned or silvered, and inlaid with niello (a black silver sulfide compound).  They range in width from 1″ to 1-1/2″, and in length from 2″ to 2-1/2″.  Closer examination of many so-called “cast” plates seems to show that they are actually sheet brass (16- to 18-gauge) with the design punched into the face with small punch tools.  This would be much quicker than casting the plates individually. Many narrow plates are plain, though they are still often tinned.   Some have pegs on the back to serve as rivets (rivets can be soldered on instead), or are just riveted normally with domed or flat-headed copper rivets.  On many cast plates the rivet heads are “countersunk” and filed flush to be nearly invisible.  Some are tinned but with an untinned brass border.  Another example has a punch-work design of a vine with leaves, very simple to do with a hammer and nail.

Wide plates, measuring 1-1/2″ to 2″ wide by 1-3/4″ to 2-1/2″ long, are generally stamped from thin brass sheet (.010″), and are also often tinned or silvered.  Frequently the ends are rolled, sometimes with ball-headed pins inserted in the resulting tubes.  Belt plates often had just concentric rings.  You can use socket wrench heads of varying diameters to stamp the rings, working first from the back and then from the front.  Some original plates from Germany are tinned and have concentric rings scribed on so that the brass shows through–cut out a little steel rectangle just under an inch wide with a serrated bottom edge: one longer spike at the end which goes thru a hole in the center of the plate (like a compass, see below) and one tooth for each ring you want (4 or 6, in pairs, for example).  The trick is getting all the teeth the same length.  Then stick the spike through the hole in the plate and start scratching around.  This works on untinned plates, too.

If the ends of the belt plates are rolled, cut notches in one plate end with a file to mate with the buckle, and likewise for the frogs.

The buckle and dagger frogs (or “suspension discs”) are usually cast brass, with hinge tubes or lugs.  Frogs can be cut from sheet, from about 20-gauge up to 1/8″ thick or more, with snips and nibblers, or with a jeweler’s saw.  Buckles can be made the same way if you have no source for cast ones.

Matching hinge tubes are either cast directly with the appropriate belt plate, cut into a rolled plate end (with a file), or made seperately (folded sheet or cast) and riveted behind a plate, as shown below (with a frog cut from sheet).

The plates are riveted to a leather belt no wider than the plates themselves, with domed or flat-headed rivets.  Round or square washers may be used (“square” ones being irregularly cut from scrap brass).  The leather is 3- to 6-ounce and may be left plain, or dyed red, black, or another color.  In any case it should be well-coated with neatsfoot oil.  Do NOT use leather that is too thick!  If you use an 8-ounce belt blank you may not be able to get the belt end through the buckle.  The buckle is most often seen on the right end of the belt, while the free end is narrowed to fit it.  Be sure to position the dagger frogs far enough apart to accept your pugio scabbard, about 6″ to 7″ between the centers of the discs.  The Velsen belt and at least one sculpture imply that some belts had no plates at the back.  Be sure to make the belt the right length to go around you while you are wearing only your tunic, so that it is not too loose when you are unarmored.

The apron, misleadingly called a sporran or groin-guard, was a decorative item derived from split belt ends.  It has from 4 to 8 leather strips 3/4″ to 1″ wide by c. 10″ to 12″ long.  The leather can be thinner than that for the belt, anywhere from 2- to 6-ounce, but if it’s any heavier it will not hang properly.  Wide belts characteristically have 4 of the wider strips, about an inch wide each, while a larger number of narrow strips are usually seen only on narrow belts.  Each strip ends in a dangling terminal, and has up to 16 disc-shaped studs.  Usually these are cast brass (and occasionally inlaid), with a peg on the back to serve as a rivet.   You can solder rivets to the backs of discs, as may actually have been done with some domed Roman studs.  Studs can also be cut from sheet brass and secured with a rivet through the center.  The studs can be placed to form horizontal rows, or staggered (although the terminals all hang at the same height), or even spaced up to 2″ apart.

The apron commonly hangs over the top of the belt, being riveted or sewn to the back as shown at right, but can hang down from the bottom edge, especially on narrow belts.  In such a case the top of each strip may have a small plate like a miniature belt plate.   Some aprons that hang below the belt are shown with a rectangular plate between belt and apron, often plain-looking with just a border, but none have been found.

The apron can be 12″ long or longer, but always ends above the tunic hem.  A belt can certainly be made without an apron (in fact centurions’ belts did not apparently have them), and it is easy enough to add an apron long after the rest of the belt is finished.

Each apron strip ends in a dangling terminal, usually teardrop-shaped (see below) or a larger crescent shape.  The terminal was apparently never attached directly to the leather, but always to a metal strap end of some sort.  A simple strip of .015″ brass about 4 inches long can be folded double (around the end of the leather) and a slot made near the folded bottom end for the tongue on the terminal.  Two rivets secure this strap end, and it can be decorated, especially at its ends, with incised lines, ridges, or filed notches at the edges.  The terminals are either cast or simply cut from sheet brass, and can be decorated with punch-work.  Bone, ivory, or silver could be used for terminals, but brass was by far the most common material.  The little rectangular inlaid plates seen in Bishop and Coulston are generally used at the top of the strips on narrow belts, but they could be the strap endplates below which the terminal is hung.

At left is shown the front and back of tinned brass apron strap end and crescent-shaped terminal, based on originals from Tekije and Herculaneum, by Matthew Amt.  The studs are cast brass, also tinned.  The ends of the little tabs by which the terminal hangs from the strap end may be riveted through the terminal (brass escutcheon pins are a good size) for extra security.

All apron fittings may be tinned or silvered to match the belt.  The leather may be dyed like the belt.  There may be a reinforcing stitching of linen thread down each side of a strip, or a decorative tooled line. 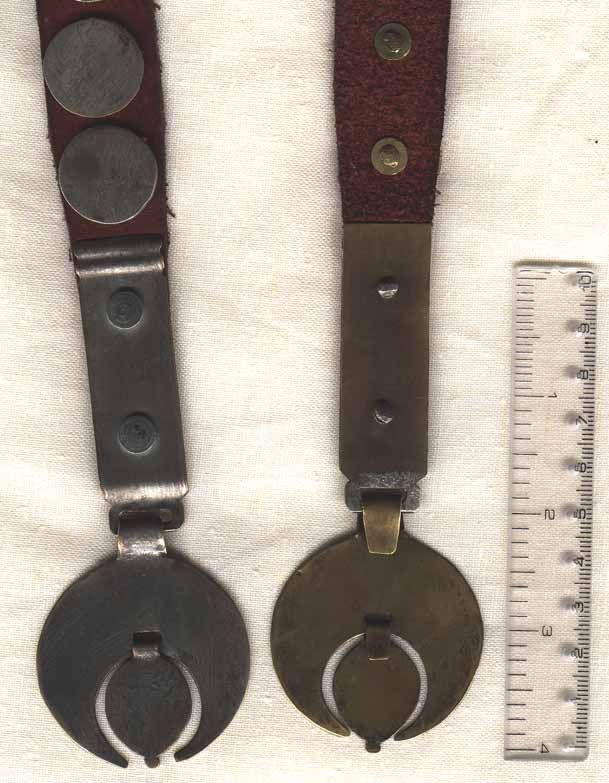 When worn, the buckle is usually on the right side so that the belt tongue points back past your right hip.  The apron can be right next to the narrow end, and if it hangs over the belt you can hide your worst plates under it!  Then will come 2 or 3 more plates followed by the gap between the pugio frogs.  Lay all the pieces out on a table, and once you are satisfied with the arrangement, number all the plates and mark their holes on the leather.  If you make the belt’s tongue extra long, you can loan it to larger friends when necessary.  There is at least one relief showing a long tongue hanging down next to the apron (with the buckle at the left end).