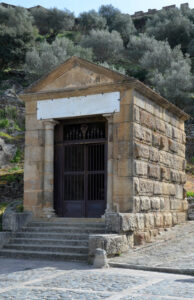 Roman gods had a place in this world, they moved freely within it. How do we know this? All Roman gods could be invoked, and that invocation implied spatial proximity to the invocator. The gods were often conceptualized as connected to specific locations. These locations were called ‘spatial foci’. These could be places of power, or they could even be physical objects that carried the essence of the god. The specific idea behind these spatial foci was to establish a point in space within which people could interact with deities. This established a zone in which gods and humans could meet, and collaborate.

The sacred landscape of Rome was complex, time-bound and notoriously conservative and did not keep pace with the actual urban development. For example, the Forum Boarium had been located was a religious center of ancient roman religion long before it became part of the city of Rome and popular marketplace for the growing city. In reality, Roman polytheism was constantly evolving and changing to meet the needs of its adherents. This is not dissimilar from other religious traditions that have existed for long periods of time.

The temple was not intended to express the differences among the various divine concepts worshipped in it, but to set it off from profane (for mortals) architecture. In terms of architectural forms, all public cults were clearly marked off from building types of human beings. The Roman’s conscious rendering of this idea was to separate the sacred from the profane, by having a wall with an open roof between them.

The lararium was another such space. It was most often found in the atrium of a Roman house. It was a place set aside for the gods of the household. It was not intended to be a temple of the Roman state religion, but rather it expressed an idea of “cultus” or veneration of domestic and ancestral spirits (ancestor cult). But like the temples, it created a physical space, an interface,, between the divine and the human sphere.

The more strongly a concept was felt to be connected to a divinity, the more firmly it was physical sacred space grounded in the landscape. Gods that represented only a slight or no specific local affiliation were notoriously ephemeral and unspecialized. Most striking is the group of ‘functional’ gods who, as their name indicates, were predominantly conceptualized on the basis of function or location. Such were offered a somewhat standardized range of cult sites: open-air sanctuaries, springs and groves (nemus), small temples, little shrines near houses (lararia), and altars at road crossings.

In the polytheistic Roman world, the cult statue of a specific god was directly linked to the spatial focus of the god. For example, in 208 B.C. the pontifices prevented M. Claudius Marcellus from dedicating a temple with one cella to two deities (Honos, Virtus). Therefore, this shows it was essential to have only one cult statue for each god in a single cella within a temple. This principle is also supported by the observation that worshipers would not pray at two altars for one and the same divinity as reported by Dumézil. The principle of the proximity of a statue to the spatial focus of a cult was an indicator of the degree to which it was intended to serve as an iconographic focus of a single cult. It also demonstrates how Romans view their gods as inhabiting physical space whether it was their temple or the worshiper’s home, in order to recognize them for who they are. [2]

In speaking of space in Roman Religion one must also consider its role in the context of ritual. In the words of Dumezil, “Ritual is a technique that consists of using space in order to create a privileged moment of observance, one in which a particular divine function is exercised.”